Forex Alien Force Indicator helps you identify trend reversals — quickly and accurately. The secret behind its accuracy is the fact that the indicator COMBINES price action and multiple sophisticated market timing algorithms to determine these significant turning points in the markets.

The secret: Clever algorithm that combines Price Action and Market Timing strategies to bring you the most accurate (and arguably most profitable) indicator you’ll ever use. 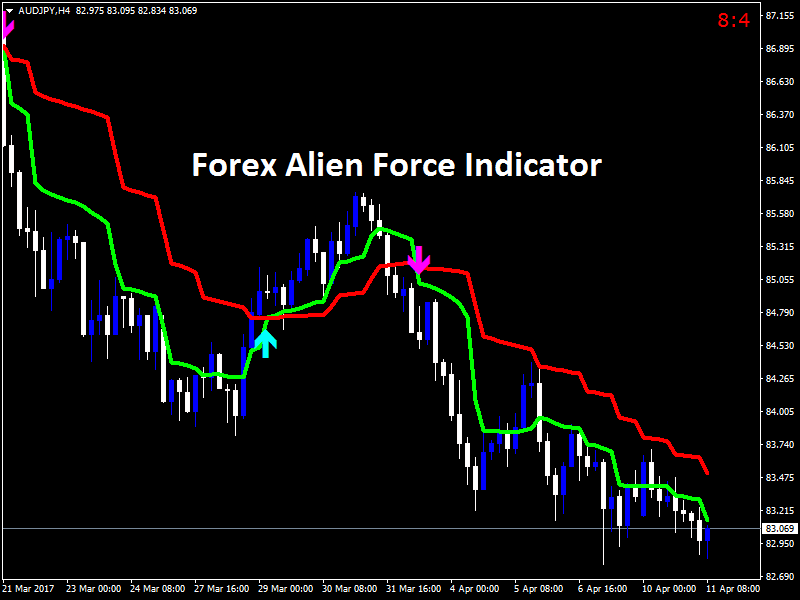 Hi there, this Forex Alien Force Indicator helps you identify trend reversals — quickly and accurately. The secret behind its accuracy is the fact that the indicator COMBINES price action and multiple sophisticated market timing algorithms to determine these significant turning points in the markets. That way, you can be sure you have the best chance to join the trend with perfect timing, and hopefully extract more profits from the trend than anybody else. Once the Alien Force indicator has spotted a reversal, it clearly displays these Buy or Sell alerts on your charts… showing you exactly where possible reversals may occur. In addition, it also gives you audio, visual, and pop-up alerts whenever a reversal is identified.

Let’s take a look at how the indicator works:

This indicator works extremely well for longer time-frames, like daily and 4-hour…

For example, let’s take a look at this example on EUR/USD 4-hour time frame:

As you can see, Alien Force indicator works exceedingly well at signaling trend reversals EARLY, even before anybody else can see what’s going on. Plus… because it uses price action primarily to determine trend reversals… One more example on USD/CHF 4-hour time frame:

From chart above you can see confirmed buy long signal which moved to the upside without any pullbacks and still brings bullish momentum!

Look at this chart to see what I mean:

This is EUR/GBP 30 minute time-frame. And in this case, from profitable short sell trade buy signal was printed which already moved to the upside gaining more momentum!

On this another example above on 30 minute chart same situation but after profitable buy long trade sell signal was generated which we can consider as a breakout!

Another example is on GBP/CAD currency pair with buy long trade which booked some pips and instantly short signal was given which already earned much more pips in profit!

And it’s extremely flexible: Works on ANY currency pair. It also works on indices, stocks, commodities, and futures.

So far we’ve been talking about how well the indicator works on low volatility examples. Lets take a look now on more extreme conditions:

From AUD/CHF currency pair I took on hour time frame you can see two trades. A short trade shows a lot of volatility followed with many spikes but my developed indicator manage to be stable till trade end which was profitable!

Another example on GBP/NZD 15 minute chart. This currency pair always tend to be hard to trade due to high volatility, but you can clearly see three trades which makes it very simple!